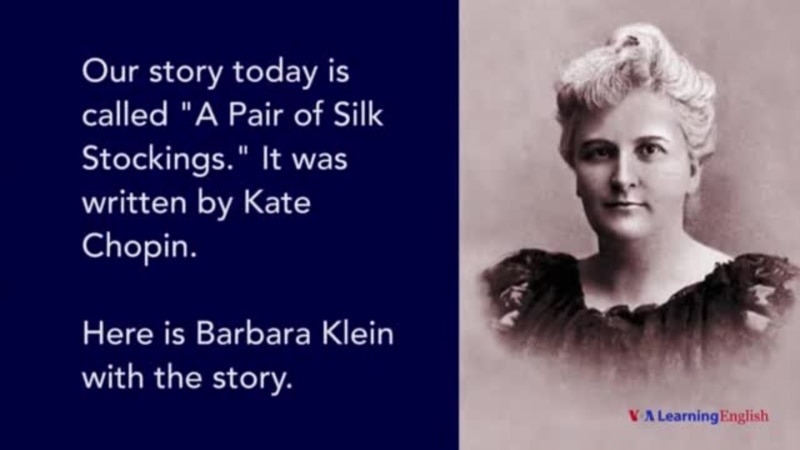 Our story is called “A Pair of Silk Stockings.” It was written by Kate Chopin. Here is Barbara Klein with the story.

Little Missus Sommers one day found herself the unexpected owner of fifteen dollars. It seemed to her a very large amount of money. The way it filled up her worn money holder gave her a feeling of importance that she had not enjoyed for years.

The question of investment was one she considered carefully. For a day or two she walked around in a dreamy state as she thought about her choices. She did not wish to act quickly and do anything she might regret. During the quiet hours of the night she lay awake considering ideas.

A dollar or two could be added to the price she usually paid for her daughter Janie’s shoes.  This would guarantee they would last a great deal longer than usual. She would buy cloth for new shirts for the boys.  Her daughter Mag should have another dress. And still there would be enough left for new stockings — two pairs per child. What time that would save her in always repairing old stockings! The idea of her little family looking fresh and new for once in their lives made her restless with excitement.

The neighbors sometimes talked of the “better days” that little Missus Sommers had known before she had ever thought of being Missus Sommers. She herself never looked back to her younger days. She had no time to think about the past. The needs of the present took all her energy.

Missus Sommers knew the value of finding things for sale at reduced prices. She could stand for hours making her way little by little toward the desired object that was selling below cost. She could push her way if need be.

But that day she was tired and a little bit weak. She had eaten a light meal—no! She thought about her day. Between getting the children fed and the house cleaned, and preparing herself to go shopping, she had forgotten to eat at all!

When she arrived at the large department store, she sat in front of an empty counter. She was trying to gather strength and courage to push through a mass of busy shoppers. She rested her hand upon the counter.

She wore no gloves. She slowly grew aware that her hand had felt something very pleasant to touch. She looked down to see that her hand lay upon a pile of silk stockings. A sign nearby announced that they had been reduced in price. A young girl who stood behind the counter asked her if she wished to examine the silky leg coverings.

She smiled as if she had been asked to inspect diamond jewelry with the aim of purchasing it. But she went on feeling the soft, costly items. Now she used both hands, holding the stockings up to see the light shine through them.

Two red marks suddenly showed on her pale face. She looked up at the shop girl.

“Do you think there are any size eights-and-a-half among these?”

There were a great number of stockings in her size. Missus Sommers chose a black pair and looked at them closely.

“A dollar and ninety-eight cents,” she said aloud. “Well, I will buy this pair.”

She handed the girl a five dollar bill and waited for her change and the wrapped box with the stockings. What a very small box it was! It seemed lost in her worn old shopping bag.

Missus Sommers then took the elevator which carried her to an upper floor into the ladies’ rest area.  In an empty corner, she replaced her cotton stockings for the new silk ones.

For the first time she seemed to be taking a rest from the tiring act of thought. She had let herself be controlled by some machine-like force that directed her actions and freed her of responsibility.

How good was the touch of the silk on her skin! She felt like lying back in the soft chair and enjoying the richness of it. She did for a little while. Then she put her shoes back on and put her old stockings into her bag. Next, she went to the shoe department, sat down and waited to be fitted.

The young shoe salesman was unable to guess about her background. He could not resolve her worn, old shoes with her beautiful, new stockings. She tried on a pair of new boots.

She held back her skirts and turned her feet one way and her head another way as she looked down at the shiny, pointed boots. Her foot and ankle looked very lovely. She could not believe that they were a part of herself. She told the young salesman that she wanted an excellent and stylish fit. She said she did not mind paying extra as long as she got what she desired.

After buying the new boots, she went to the glove department.  It was a long time since Missus Sommers had been fitted with gloves. When she had bought a pair they were always “bargains,” so cheap that it would have been unreasonable to have expected them to be fitted to her hand.

Now she rested her arm on the counter where gloves were for sale. A young shop girl drew a soft, leather glove over Missus Sommers’s hand. She smoothed it down over the wrist and buttoned it neatly.  Both women lost themselves for a second or two as they quietly praised the little gloved hand.

There were other places where money might be spent. A store down the street sold books and magazines. Missus Sommers bought two costly magazines that she used to read back when she had been able to enjoy other pleasant things.

She lifted her skirts as she crossed the street. Her new stockings and boots and gloves had worked wonders for her appearance. They had given her a feeling of satisfaction, a sense of belonging to the well-dressed crowds.

She was very hungry. Another time she would have ignored the desire for food until reaching her own home. But the force that was guiding her would not permit her to act on such a thought.

There was a restaurant at the corner. She had never entered its doors.  She had sometimes looked through the windows. She had noted the white table cloths, shining glasses and waiters serving wealthy people.

When she entered, her appearance created no surprise or concern, as she had half feared it might.

She seated herself at a small table. A waiter came at once to take her order. She ordered six oysters, a chop, something sweet, a glass of wine and a cup of coffee.  While waiting to be served she removed her gloves very slowly and set them beside her. Then she picked up her magazine and looked through it.

It was all very agreeable. The table cloths were even more clean and white than they had seemed through the window. And the crystal drinking glasses shined even more brightly. There were ladies and gentlemen, who did not notice her, lunching at the small tables like her own.

A pleasing piece of music could be heard, and a gentle wind was blowing through the window. She tasted a bite, and she read a word or two and she slowly drank the wine. She moved her toes around in the silk stockings. The price of it all made no difference.

When she was finished, she counted the money out to the waiter and left an extra coin on his tray. He bowed to her as if she were a princess of royal blood.

There was still money in her purse, and her next gift to herself presented itself as a theater advertisement. When she entered the theater, the play had already begun.  She sat between richly dressed women who were there to spend the day eating sweets and showing off their costly clothing. There were many others who were there only to watch the play.

It is safe to say there was no one there who had the same respect that Missus Sommers did for her surroundings. She gathered in everything —stage and players and people — in one wide sensation. She laughed and cried at the play. She even talked a little with the women. One woman wiped her eyes with a small square of lace and passed Missus Sommers her box of candy.

The play was over, the music stopped, the crowd flowed outside. It was like a dream ended. Missus Sommers went to wait for the cable car.

A man with sharp eyes sat opposite her.  It was hard for him to fully understand what he saw in her expression. In truth, he saw nothing — unless he was a magician. Then he would sense her heartbreaking wish that the cable car would never stop anywhere, but go on and on with her forever.

“A Pair of Silk Stockings” was written by Kate Chopin.  Your storyteller was Barbara Klein.  Dana Demange adapted and produced it.

Download activities to help you understand this story here.

Now it’s your turn to use the words in this story. If you were given a large amount of money, how would you spend it? Write to us in the Comments Section or on our Facebook page.

How well do you understand the story?

This lesson plan is based on the CALLA Approach, and teaches the learning strategy of predicting to help students understand the story.

investment – n. something that you buy with the idea that it will increase in value, usefulness, etc.

ankle- n. the joint where the foot joins the leg

oyster- n. a type of shellfish that has a rough shell with two parts and that is eaten both cooked and raw

chop- n.  a small piece of meat that usually includes a bone from an animal’s side

sensation- n.  a particular feeling or effect that your body experiences

lace- n. a very thin and light cloth made with patterns of holes

Ads
About Us In English Online, there are resources such as Audio Stories (with subtitles), Conversation, Ielts for you to learn English by yourself.