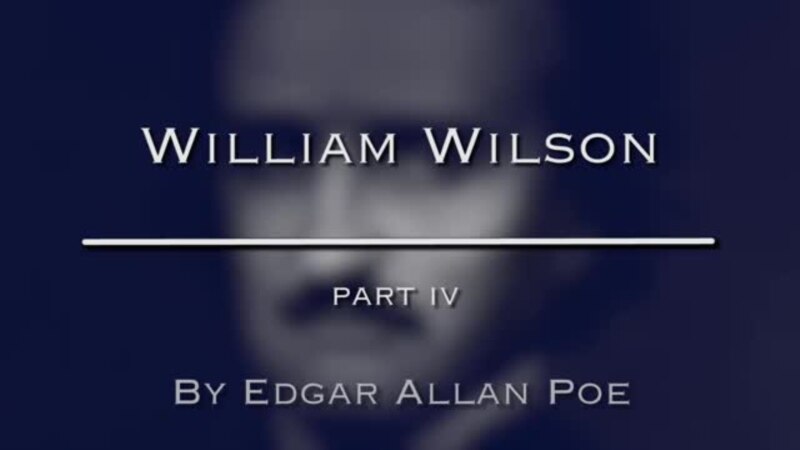 We present the last of four parts of the short story “William Wilson,” by Edgar Allan Poe. The story was originally adapted and recorded by the U.S. Department of State.

As I ended the last part of my story, I was speaking of that terrible evening when I played cards with a young gentleman called Glendinning. We were in the room of one of my friends at Oxford University. I had just realized that the young man, weak of mind and weakened by wine, had allowed me to win from him everything he owned. I was still trying to decide what I should do, when, as I said…

The wide, heavy doors of the room were suddenly opened. Every light in the room went out; but I had seen that a stranger had entered; he was about my own height, and he was wearing a very fine, long coat. The darkness, however, was now complete; and we could only feel that he was standing among us. Then we heard him speak. In a soft, low, and never-to-be-forgotten voice, which I felt deep in my heart, he said: “Gentlemen, I am here only to do my duty. You cannot know the true character of the man who has tonight taken a large amount of money from Mr. Glendinning. Please have him take off his coat, and then look in it very carefully.”

While he was speaking there was not another sound in the room. As he ended, he was gone.

Can I — shall I — tell what I felt? Need I say that I was afraid, that I felt the sick fear of those who are judged forever wrong? Many hands held me. Lights were brought. My friends looked in my coat. In it they found all the high cards, the valuable cards needed to win in the game we had been playing. Secretly using these cards, I could have taken the money of anyone who played the game with me. Mr. Preston, in whose room we were, then said: “Mr. Wilson, this is yours.” He lifted from the floor a fine, warm coat, and said, “We shall not look in this to prove again what we have proved already. We have seen enough. You will understand, I hope, the need for you to leave the University. At the very least, you must leave my room, and leave it now.”

Down in the dust though my spirit was, I might have tried to strike him for those words if at that moment I had not noticed something very surprising. My coat had cost more money than most men could spend, and it had been made especially for me. It was different, I thought, from every other coat in the world. When, therefore, Mr. Preston gave me the coat which he had picked up from the floor, I saw with terror that my own was already hanging on my arm, and that the two were alike in every way. I remembered that the strange being who had so mysteriously entered and left the room had had a coat. No one else in the room had been wearing one. I placed the coat offered by Preston over my own, and left his room.

The next morning I began a hurried journey away from Oxford University. I ran, but I could not escape. I went from city to city, and in each one Wilson appeared. Paris, Rome, Vienna, Berlin, Moscow — he followed me everywhere. Years passed. I went to the very ends of the earth. I ran in fear, as if running from a terrible sickness, and still he followed. Again and again I asked myself, “Who is he? — where did he come from? — and what was his purpose?” But no answer was found. And then I looked with the greatest care at the methods of his watch over me. I learned little. It was noticeable, indeed, that when he appeared now, it was only to stop me in those actions from which evil might result. But what right did he have to try to control me?

I also noticed that although he always wore clothes the same as mine, he no longer let me see his face. Did he think I would not know him? He destroyed my honor at Oxford, he stopped me in my plans for getting a high position in Rome, in my love in Naples, in what he called my desire for too much money in Egypt. Did he think I could fail to see that he was the William Wilson of my schoolboy days, the hated and feared William Wilson? But let me hurry to the last scene in my story.

Until now I had not tried to strike back. He was honorable and wise, he could be everywhere, and he knew everything. I felt such wonder and fear of him that I believed myself to be weak and helpless. Though it made me angry, I had done as he desired. But now I wanted more and more to escape his control. As I began to grow stronger, it seemed to me that he began to grow weaker. I felt a burning hope; in my deepest thoughts I decided that I was going to be free.

It was at Rome, during the Carnival of 1835, that I went to a dance in the great house of the Duke Di Broglio. I had been drinking more wine than is usual, and the rooms seemed very crowded and hot. I became angry as I pushed through the people. I was looking (Let me not say why)…I was looking for the young, the laughing, the beautiful wife of old Di Broglio. Suddenly I saw her; but as I was trying to get through the crowd to join her, I felt a hand placed upon my shoulder, and that ever-remembered quiet voice within my ear.

In a wild anger I took him in a strong hold. Wilson was dressed, as I had expected, like myself, in a rich coat of blue. Around his body was a band of red cloth from which hung a long sharp sword. A mask of black cloth completely covered his face.

“You again!” I cried, my anger growing hotter with each word. “Always you again! You shall not — you shall not hunt me like this until I die! Come with me now or I will kill you where you stand.” I pulled him after me into a small room nearby. I threw him against the wall and closed the door. I commanded him to take his sword in his hand. After a moment, he took it and stood waiting, ready to fight.

The fight was short indeed. I was wild with hate and anger; in my arm I felt the strength of a thousand men. In a few moments I had forced him back against the wall, and he was in my power. Quickly, wildly, I put my sword’s point again and again into his heart.

At that moment I heard that someone was trying to open the door. I hurried to close it firmly, and then turned back to my dying enemy. But what human words can tell the surprise, the horror which filled me at the scene I then saw?! The moment in which I had turned to close the door had been long enough, it seemed, for a great change to come at the far end of the room. A large mirror — a looking glass — or so it seemed to me — now stood where it had not been before. As I walked toward it in terror I saw my own form, all spotted with blood, its face white, advancing to meet me with a weak and uncertain step.

So it appeared, I say, but was not. It was my enemy — it was Wilson, who then stood before me in the pains of death. His mask and coat lay upon the floor. In his dress and in his face there was nothing which was not my own!

It was Wilson; but now it was my own voice I heard, as he said: “I have lost. Yet from now on you are also dead — dead to the World, dead to Heaven, dead to Hope! In me you lived — and, in my death — see by this face, which is your own, how wholly, how completely, you have killed — yourself!”

Download a lesson plan to use with this story here.

Now it’s your turn to use the words in this story. When you do something bad, is it better to face the results of your actions quickly or later in life? What are some things you can do to make people want to forgive you? Let us know in the comments section or on our Facebook page.

The lesson plan below, based on the CALLA approach, helps students practice the strategy Use Graphic Organizers to look carefully at the similarities and differences between the two William Wilsons.

cards – n. small pieces of stiff paper that are marked with symbols or pictures to show their value, come in a set, and are used for playing games

gentleman – n. a man who treats other people in a proper and polite way

coat – n. an outer piece of clothing that can be long or short and that is worn to keep warm or dry

duke – n. a man of very high rank in the British nobility

shoulder – n.  the part of your body where your arm is connected

band – n. a flat, straight piece of material (such as plastic or metal) that forms a circle around something

sword – n. a weapon with a long metal blade that has a sharp point and edge

mask – n. a covering for your face or for part of your face, such as to hide or disguise your face

This will close in 30 seconds